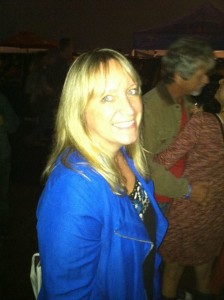 Susan Dynner began her career at the age of fifteen as a band photographer when she started photographing punk bands such as The UK Subs, Minor Threat, Dead Kennedys, Black Flag as well as UB40, Psychedelic Furs, Squeeze, The English Beat, and many more. Her photos have been published on album covers, in books, on t-shirts, and in magazines. She is also a fine artist whose paintings have been displayed in galleries around the world.

After earning her degree at University of Wisconsin-Madison, Susan moved to Los Angeles, where she held various positions, including jobs at Touchstone, Richard Donner Productions, Di Novi Pictures and Wolfgang Petersen’s Radiant Productions. Later, she joined Charlie Sheen and Nick Cassavetes’ Ventura Films as VP of Creative Affairs, before leaving to join Steve Herzberg as a Producer and VP of Development/Production for Prairiefire Films, who had deals with Sony and AOL. As a screenwriter, she was a finalist in the prestigious Chesterfield Screenwriting Competition for her screenplay, “Lost Not Found”.

In 2005, Susan teamed up with producer Mark Mathis, and together they formed Still Water Films. There, they produced the feature film “Brick”, written and directed by Rian Johnson, and starring Joseph Gordon-Levitt and Lucas Haas. “Brick” won the Special Jury Prize for Originality of Vision at the Sundance Film Festival, and was released by Focus Features.

Then, Dynner formed Aberration Films, and under that banner, released “Punk’s Not Dead”, a documentary feature that she directed, produced and shot. The film, which premiered Cannes, followed by the AFI SilverDocs Film Festival, has received much acclaim. Celebrated by critics from Variety to The Hollywood Reporter to the LA Times, it went on to screen at many more prestigious festivals, including Melbourne, Copenhagen, Buenos Aires, San Francisco, and AFI Dallas, before its theatrical run (32 US cities and worldwide distribution). She also produced the feature documentary, “After Porn Ends”, which was one of the top titles on iTunes, Amazon and Netflix.

Susan Dynner most recently directed and produced “Code Blue: A Love Story”, starring Andy Dick. Based on that film, she was selected as a Sony Pictures Television Diverse Directing Fellow. Before that, she produced the feature film, “Free Ride” (for which she was a Film Independent Producers Lab Fellow), starring Anna Paquin, Cam Gigandet and Drea DeMateo, which had a limited theatrical release and then debuted on HBO. Next, Dynner will direct/produce “Fall of Eden”, an intense, gripping drama in the vein of “Crash”. Dylan McDermott and Brianna Hildebrand are attached to star. Her script, “Born to Lose”, based on the true story of musician Johnny Thunders, was just selected as part of a fund and will film next year, with Dynner directing and producing. She was recently awarded the prestigious Sundance Stories of Change Fellowship, and she’s a mentor for the Producers Guild Power of Diversity program. Dynner is also a Magician Member of the world-famous Academy of Magical Arts at the Magic Castle. Aberration Films has several other projects in various stages of development.